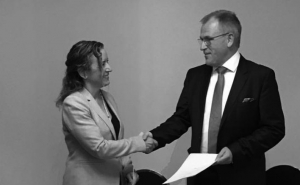 Following the change of name from the International Show Jumping Officials’ Club (ISJC), which was voted in unanimously by Club members at last month’s General Assembly in Leipzig (GER), this new MOU replaces the previous one between the FEI and ISJC that was signed in January 2014.

The IJOC works closely with the FEI, National Federations and Organising Committees of international Jumping events. With representatives from more than 50 nations, the IJOC brings together all active FEI Jumping Officials, creating a comprehensive and worldwide network.

“The FEI and the IJOC have enjoyed a cooperative relationship for many years and, with the new MOU, agree to continue working together in areas of common concern and capability, achieving the high standards of education for Jumping Officials all over the world,” FEI Secretary General Sabrina Ibáñez said.

“We are very proud of our association, but know that more can be done in collaboration to improve and protect the integrity of horse sport at the very highest level, leveraging the popularity and constant growth of our sport under the umbrella of best-in-class governance standards.”

“In January 2014, the ISJC was one of the first stakeholder groups to sign a Memorandum of Understanding with the FEI and at the time, on behalf of the Club, I expressed the hope that we would continue to work closely with the FEI”, IJOC President Stephan Ellenbruch said.

“Now, three years later, I am delighted that under our new name, International Jumping Officials Club, the MOU has been renewed and the Club’s relationship with horse sport’s governing body has developed and strengthened as hoped.

“I know I speak for all our members in thanking the FEI for its ongoing support, and we assure them of our continued cooperation for the benefit of our sport and all those connected with it.”

The 2018 IJOC refresher seminar will take place at the Olympic Museum, Lausanne (SUI) from 2-4 February 2018.

The FEI is the world governing body for horse sport recognised by the International Olympic Committee (IOC) and was founded in 1921. Equestrian sport has been part of the Olympic movement since the 1912 Games in Stockholm.

The FEI is the sole controlling authority for all international events in the Olympic sports of Jumping, Dressage and Eventing, as well as Driving, Endurance, Vaulting and Reining.

The Club works closely with the FEI, National Federations and Organising Committees of International Jumping events but is totally independent.

With representatives from more than 50 nations, the IJOC offers its members the opportunity to exchange ideas, share experiences and improve their knowledge of equestrian sport in general and Jumping in particular, thereby supplying them with the tools to perform their various roles with the professionalism that all the amateur and professional players in the sport expect and deserve.

IOC confirmation of equestrian sport in 2024 Olympics
Scroll to top